In their book Behavior in Organizations, Jerald Greenberg and Robert Baron define perceptual biases as they refer to the tendency of making inferences about the others’ disposition, traits and characteristics on the basis of what has been observed of their action. In other words, through observing the behaviour of an out-group member, we tend to draw conclusions about the person’s characteristics and to find explanations of why s/he behaves the way s/he does. These perceptual biases consist of five dimensions as follows:

It is a concept which refers to people’s tendency to explain a behaviour of in-group members by looking at causes in the environment and context, but for the out-group members in their traits themselves. The US, for instance, constitutes an out-group for the Middle East and is explained by looking at its nature and motives rather than looking at the surrounding political environment. Therefore, any American political attitude towards or action in the Middle East is more likely to be explained as a part of the US nature of being a hegemon. Pan-Arabic and national parties, such as Baath Party in Syria and previously in Iraq, stress concepts of resistance and independence against the post-colonial power, while Islamic factions, such as the Muslim Brotherhood in Syria, Jordan, Palestine and Egypt, stress concepts of authenticity against American threats of westernisation and secularisation of the Islamic community.

This concept, which is often linked with corporate advertising, refers to the tendency of constructing negative or positive impressions of the other and applying these qualities to everything related to them, even matters about which the in-group has minimum or no knowledge. For instance, according to Max Haller’s research, the western world is depicted as an ambivalent entity. Negative qualities can be easily applied to anything comes from the ‘West’.

The Halo effect could start from schoolbooks maximising the gap of knowledge about the other. Elementary schoolbooks portray the “Western imperialism and Zionistic aggressiveness”, which constantly threaten the Arab Muslim world. According to Hall, very few European or other western countries “are mentioned by name at all; non-Arabic foreign countries are portrayed in surprisingly shadowy and abstract terms.”

Despite the fact that the ‘West’ brought technology and made positive achievements for humanity, they are the ones who subjugated the Arab-Islamic world and helped Israel to drive away millions of Palestinians from their homeland. Such cultural perception, when maximised, could significantly contribute to constructing negative impressions about the other and tends to extend it to all other dimensions of interaction. This construction of negative impressions about the ‘Other’ is not exclusive to one society, but rather a common denominator among all societies.

For instance, several European authors, journalists, reporters and even political parties also depicted the Muslim-majority Arab world as a monolithic, violent, totalitarian and fundamental bloc such as inter alia Mr René Stadtkewitz, the former member of the conservative Christian Democratic Union (CDU) in Germany and Mr Geert Wilders the founder and leader of the Party for Freedom in the Netherlands and Robert Spencer, an American blogger who claims to know much about Islam.

It is the tendency of individuals to focus on certain aspects and characteristics of the target culture ignoring others. Selective perception could steer the attention of a collective group and direct it to amplify certain features of the ‘Other’. Focusing on the more secular nature of Europe or the US in comparison with the Middle East and neglecting the equal constitutional rights guarantied for all Muslim citizens residing in Europe and the US is a case in point. In the philosophical sense, secularism is linked to non-belief, an issue unpleasantly seen by the majority of Muslims.

It is the tendency to assume that the other party (the out-group) sees things the same way in-group party does and accordingly has the same beliefs, understanding and values. It refers to the problem of using one’s own meanings to make sense of other’s reality. A prominent example could be the controversy of Salman Rushdie’s novel and how the West on one hand perceived it as a freedom of speech matter and Muslims were expected to act accordingly, while the Muslim-majority world on the other hand perceived it as a blasphemous libel of Islam and the West was expected to attribute the same meanings to it.

In 2011, Ahmed Al-Tayyeb, the Grand Imam of Al-Azhar (The biggest mosque and university in Egypt) said to the Saudi TV Alarabiya that the West has not dealt with Islam respectfully referring to what he called a series of hatred campaigns against Islam starting with Salman Rushdie’s novel ‘The Satanic verses’ then the cartoons of the prophet Muhammad in Denmark to the 2011 publication of other caricatures of the prophet by the French newspaper Cahrlie Hebdo. While such claims might be considered conservative or false in the West, they might be considered heroic in the Muslim majority world.

The lack of proper knowledge makes it easer to cloud cultural perception by building up generalisation and stereotyping patterns against the collective other. Stereotypes are both descriptive and prescriptive. They are descriptive because they form the perceiver’s belief and understanding about the characteristic of the target group, and prescriptive because they function as social expectations. By maximising perceptual biases about the collective other, specific factions in the Middle East as well as in Europe might find good material for their propaganda rhetoric. 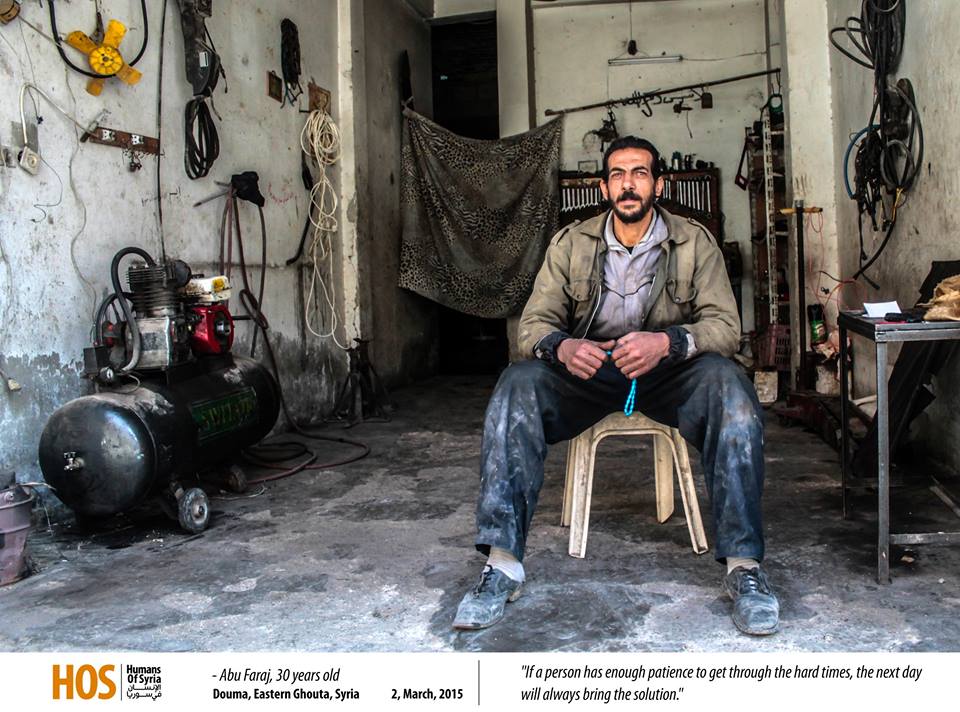 “Humans of Syria” initiative could reach boundaries beyond war. They approached the human in the Syrian conflict that each one of us should learn about such as Abu Faraj, aged 30, who has been living
Read More