Sports and air transport are likely to serve as indicators of whether Iran has the flexibility to become a major node in an increasingly globalized world. At the core of Iranian efforts to become a global sports and airline hub will be its willingness to relax strict gender segregation, dress codes and its ban on alcohol.

How Iran deals with the issues of women’s sporting rights as well as likely demands for relaxed restrictions at its international airports and on board its airlines will also serve as an indicator of how flexible Iranian hardliners, the main benefactors of the lifting of international sanctions, will be in taking advantage of Iran’s return to the international fold as a result of an international agreement on the future of its nuclear program.

While the issue of gender segregation at sporting events has already arisen as a result of Iran’s hosting this year of two international volleyball tournaments, demands for relaxed restrictions in air transportation will emerge as Iran prepares to turn Tehran’s Imam Khomeini International Airport and state-owned Iran Air into global hubs that compete with the airports of Istanbul, Doha, Dubai, and Abu Dhabi and their airlines, Turkish Airways, Qatar Airways, Emirates and Ettihad.

Iranian responses to criticism of the banning of women by human rights groups holds out hope that Iran could prove more flexible than many expect it to be. Human Rights Watch quotes executives of the International Volleyball Federation (FIVB) as saying after a meeting with Iranian sports and youth minister Mahmoud Goudarzi, that progress was possible on the “key aim…of families being able to attend volleyball matches.”

Similarly, FIVB general director Fabio Azevedo told Inside the Games that “discussions are still ongoing and we are hoping for a positive outcome ahead of the FIVB World Tour open event on (Iran’s) Kish Island,” which is scheduled to kick off on February 15.

Granting women the right to attend the Kish Island event would have greater symbolic significance given that volleyball was the last sports bastion that Iranian hardliners conquered when they pushed through the ban on women in 2012. Volleyball has until then been one of the few male sporting events accessible for women.

Based on past experience, Human Rights Watch however takes the prospects of a reversal of the ban with a grain of salt. “Hopeful? That is not enough. Iran promised last June that female fans could attend matches, only to renege and threaten them before the tournament, dashing the hopes of women waiting to return to stadiums,” said the group’s Minky Worden.

Ms. Worden’s scepticism is reinforced by the fact that caving in to international pressure in advance of this month’s elections for parliament and the Assembly of Experts, the council that elect’s Iran’s spiritual leader, may prove difficult. The bulk of reformist candidates for both councils did not pass muster and were disqualified.

On the air transport front, Iran signalled its intention to become a major transportation hub with signing of a $27 billion agreement with Airbus for the purchase of 118 jets, one of the first major deals since the lifting of the sanctions, as well as contracts to expand Tehran’s international airport. The plane deal included Airbus A380s that are part of the Gulf airlines’ fleets.

“Certainly this is our historical position: we have always been a centre for communications in the region,” Iranian transport minister Abbas Akhouni told Reuters. Iran Air chairman Farhad Parvaresh noted that “we used to be a very important airline in the region and globally, so of course we want to play our role fully once again.”

To do so, Iran, despite a domestic passenger market that is expected to grow exponentially, will have to match Gulf and Turkish airlines in their willingness not to enforce Islamic law as it regards gender interaction, dress codes, and alcohol. The degree to which this is already a debate even among hardliners is reflected in the fact that some have criticized the Airbus deal for diverting cash from other social and economic priorities.

The outcome of the debate is likely to say much about Iran’s future course. Virtually all commercial agreements like the Iran Air deal signed since the lifting of the sanctions have been with state-owned conglomerates with close ties to pension funds and other government agencies such as the Revolutionary Guards Corps, which is widely seen as a pillar of hard-line factions in Iran. The deals also include a $2 billion with an Italian steel producer and a $439 million agreement with Peugeot.

Both sports and Iran’s air transport ambitions will put to the test the Islamic republic’s strategy to make state-owned companies and state-controlled associations the primary beneficiary of the lifting of the sanctions in the belief that this will allow it to limit Western influences that could come with foreign investment.

“Investments through our big enterprises can be controlled,” said Hamidreza Taraghi, an analyst with close ties to the government, in an interview with The New York Times. Ruling out a complete opening of the Iranian market, Mr. Taraghi argued that “that would provide leverage to Western governments and investors, leverage they would use to influence our politics, culture and society.”

Ultimately, what is likely to determine the outcome of the debate, is what price Iran is willing to pay in terms of reigning in its ambitions to uphold its principles. Iran has demonstrated its ability to do so with its resilience during the years that it was subject to punitive sanctions. Nonetheless, it was ultimately willing to negotiate a nuclear deal, even if it drove a hard bargain.

Market forces and the choices Iran makes will determine whether it emerges as a competitive regional transportation hub. When it comes to sports, the onus will be on international sports federations if Iran does not take a first step by lifting the ban on women attending male volleyball matches. A failure by Iran to do so, would signal that the price for Iran for flouting international rules isn’t yet high enough. 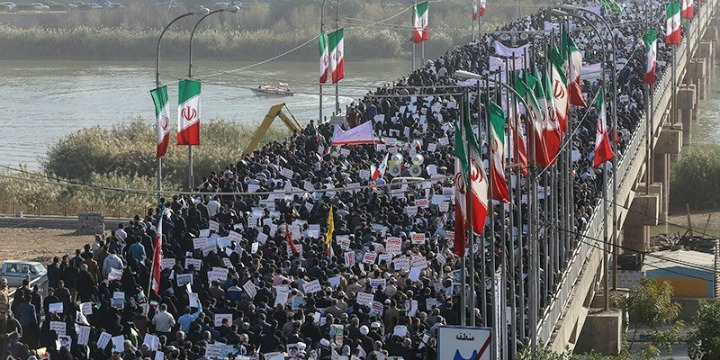