Thousands of Al-Sadr’s followers moved blast walls and fences, pushed their way into the zone and entered several of the government buildings that constitute the seat of power of the Iraqi government.

The zone is also the home of the huge American embassy as well as other foreign missions.  The ease by which the demonstrators entered the facility is telling. Iraqi security forces are capable of defending the zone and repelling the demonstrators, but there was little resistance from the guard force.

Many of the demonstrators remarked that they were treated fairly by the soldiers and police as long as they did not pose a threat. Reportedly, the general in charge of security personally welcomed Al-Sadr to the restricted area.

Why was there no armed confrontation?   I suspect there was almost no violence because Muqtada Al-Sadr and the demonstrators are demanding the same thing Iraqi Prime Minister Haydar Al-‘Abadi has been advocating for months – the end of the rampant corruption and cronyism that permeates virtually every level of the Iraqi government.

The nonviolent demonstrations are a departure from Al-Sadr’s past. The cleric has a long history of violent confrontations with the Iraqi government, and his Iranian-trained and supplied jaysh Al-mahdi (JAM, or Army of the Mahdi) was responsible for the deaths of hundreds of American troops between 2004 and 2007.

It was only the American “surge” of 2007-2008 that saw the demise of the JAM – Al-Sadr assessed, correctly, that his thugs were no match for the newly-deployed US Army combat battalions tasked with securing Baghdad. Al-Sadr, thus, fled to Iran.

The cleric remained in Iran for over three years, returning to Iraq in early 2011. Ostensibly, Al-Sadr was in Qom to continue his Islamic studies and attain the title of ayatollah; he had been a hawjat Al-islam prior.

It is difficult to believe this claim was only for his followers, since he has not attained the title of either mujtahid – one authorized to issue fatwas, or religious rulings – or ayatollah. His return to the Shiite holy city of Al-Najaf, site of the martyrdom of the first Shiite imam Ali – son in law and cousin of the prophet Muhammad – was greeted with almost uncontrollable revelry in the streets.

Why is this 42-year-old such an influential figure in Iraqi politics?

Muqtada Al-Sadr is a sayyid. Sayyid is the Arabic word for mister, or sir. However, in Shiite Islam it denotes a person who is a direct descendant of the prophet Muhammad through his daughter Fatimah and Imam Ali. Sayyids are entitled to wear the black turban.

The Shiites believe that leadership of the faithful should have been restricted to the prophet’s bloodline, and Al-Sadr clearly qualifies. His family lineage is traceable back to the sixth iman, Ja’afar Al-Sadiq, and the seventh imam, Musa Al-Khadhim.

The shrine of the seventh imam is located in the northwest section of Baghdad, appropriately named Al-Khadhimiyah. While Westerners sometimes dismiss the cache of direct lineage to the prophet, Iraqis do not. Coincidentally, the annual remembrance ceremony for the seventh imam is this week. Muqtada Al-Sadr is arguably now the key power broker in Iraq. When he called his followers back from the demonstration in the Green Zone, he issued an ultimatum to Prime Minister Al-‘Abadi that the Iraqi leader has until Friday (May 06) to effect changes in the Iraqi cabinet, replacing corrupt politicians with qualified technocrats.

If that deadline is not met, the demonstrations will resume. Al-Sadr has further threatened to bring down the Al-‘Abadi government and force early Parliamentary elections – elections he can greatly influence.

Al-‘Abadi should take Muqtada Al-Sadr seriously. The firebrand cleric has proven that he can mobilize thousands of disciplined demonstrators and create problems for the Iraqi government – at a time when the government needs to devote its time and energy to the on-going fight against the Islamic State in Iraq and Syria (ISIS). 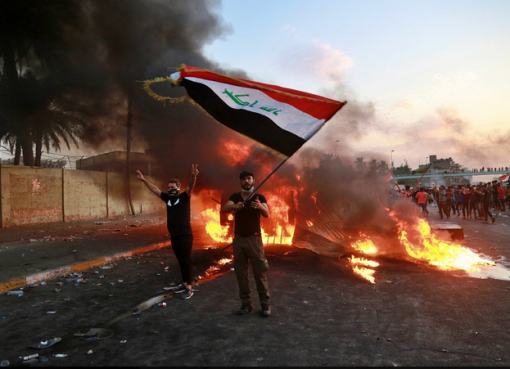