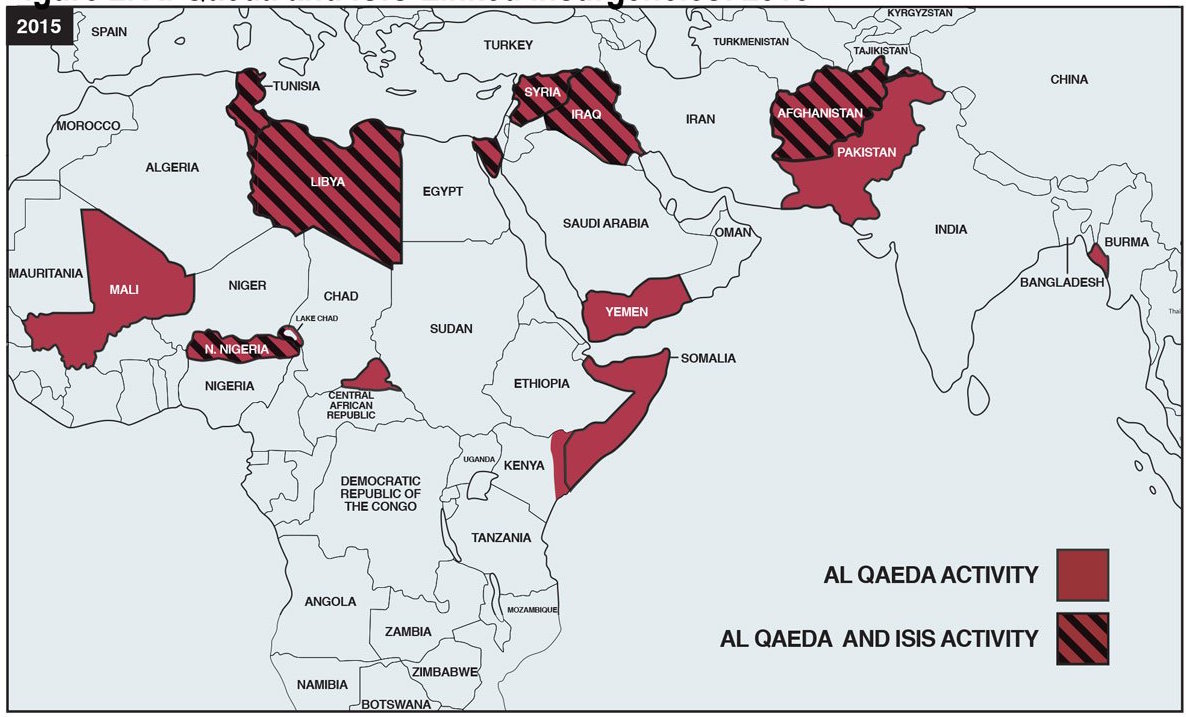 The bloodthirsty jihadist organization that calls itself Islamic State (IS) sprang from the loins of al-Qaeda, once the supreme bane of the western world, which achieved its apogee with the destruction of the twin towers in New York. Over the past decade the fortunes of the two Islamist bodies have diverged, with IS apparently going from strength to strength and al-Qaeda apparently diminishing in influence. Now the wheel of fortune has turned, and as a result parent and offspring are at each other’s throats.

The assault on the United States that shook the civilized world to its foundations occurred on the 11th of September 2001. An investigation by the FBI quickly determined that those responsible were directly connected to al-Qaeda. By the start of December 2001, US special operations forces had tracked the leader of al-Qaeda, Osama bin Laden, and some one thousand of his followers, to their six square mile hideout deep in the Tora Bora mountains of eastern Afghanistan. For two weeks nearly a million pounds of American bombs rained down on them. Although about two hundred terrorists were killed and fifty captured, the US operation could scarcely be deemed a success, for most the jihadists, together with their leader, evaded capture, fled into Pakistan’s lawless tribal belt and disappeared.

It took nearly ten years before a special commando force of the US Naval Special Warfare Development Group, known as SEALs, finally located bin Laden’s new headquarters inside Pakistan, tracked him down and killed him. During that decade al-Qaeda groups mounted a succession of bombings and terrorist attacks across the globe.

Only a few weeks after bin Laden’s death, Ayman al-Zawahiri, who had helped found Egypt’s Islamic Jihad, became the new leader of al-Qaeda. In the 22 “most wanted terrorists” list announced by the US government in 2001, Zawahiri was number two – behind only bin Laden. Al-Zawahiri vowed to continue al-Qaeda’s jihad against “crusader America and its servant Israel, and whoever supports them”. At that time, in 2011, al-Qaeda was the supreme representation of Islamist jihad of the Sunni persuasion. What al-Zawahiri did not realize was that he was nurturing a viper in his bosom – the nascent Islamic State.

IS grew out of the US-led invasion of Iraq in 2003. An off-shoot of al-Qaeda, dedicated to opposing any attempt by Western powers to impose law, order and a democratic framework on that unhappy country, was founded by Abu Musab al-Zarqawi. In the early days, it called itself simply the “Islamic State of Iraq.”   When al-Zarqawi was killed in a targeted strike by the US Air Force in June 2006, into his shoes stepped Abu Bakr al-Baghdadi.

Baghdadi had a wider vision for the militant organization he led – and his own future. In 2013 he announced that he intended to merge his “Islamic State of Iraq” with the main al-Qaeda force in Syria under Jabhat Al-Nusra, which was fighting the Assad regime alongside other rebel groups. He proclaimed that his organization would henceforth be called ISIS (the Islamic State of Iraq and al-Sham, meaning Syria and the Levant).

The overweening ambition that lay behind that title sent shivers down the spines of the al-Qaeda leadership. At that moment the two organizations parted company. Ayman al-Zawahiri denounced Baghdadi and dissociated al-Qaeda from ISIS and its activities.

But the new organization was on the up-and-up. In the space of a year, Baghdadi became the most powerful jihadi leader in the world. Ignoring the border between Iraq and northern Syria, ISIS swept across to capture territory extending from Aleppo in north-western Syria, to Diyala province in north-eastern Iraq. In June 2014 Baghdadi’s forces captured Mosul, the northern capital of Iraq, and were threatening Baghdad. Crucifixions, beheadings and amputations marked its ruthless progress.

June 2014 was when Baghdadi felt emboldened enough to take a giant step towards achieving power and status for himself and his organization beyond the wildest dreams of most jihadi leaders. In an audio recording ISIS announced that it was henceforth to be known as “Islamic State”, and that its head, Abu Bakr al-Baghdadi, was now “the caliph and leader for Muslims everywhere”. Moreover, declared the group’s spokesman Abu Mohamed al-Adnani, “the legality of all emirates, groups, states and organisations becomes null by the expansion of the caliph’s authority and the arrival of its troops to their areas.”

Al-Qaeda and its associated jihadist groups simply refused to bow the knee to Baghdadi. In September 2015 al-Zawahiri accused Baghdadi of “sedition”, insisting that he was not the leader of all Muslims, not “caliph” of the Islamic State, and was not the supremo of militant jihad.

In November 2015, IS spokesman Abu Muhammad al-Adnani warned Sunni Muslims that unless they pledged allegiance to the organization, they faced death. The response was a 26-minute-long video statement from al-Qaeda in the Arabian Peninsula (AQAP) and al-Qaeda in the Islamic Maghreb (AQIM) in which they declared unequivocally that the Islamic caliphate promoted by IS was illegitimate.

Now the two contenders as the world’s leading Sunni jihadist organisation stood face-to-face in the ring.

Al-Qaeda seems to have regained its momentum. The withdrawal of Western forces from Afghanistan at the end of 2014, was the signal for al-Qaeda terrorist cells to leave their Pakistan hideaway and move back into southern Afghanistan. According to Afghan security officials, al-Qaeda chiefs are hoping to use their new Afghan base to plot a fresh wave of terror attacks against the West and its allies.

If IS had hoped to displace al-Qaeda as the jihadi vanguard, their plans have badly misfired. IS has found itself at war with its former patrons throughout the Muslim world. Nor is it necessarily winning the battle, suggests Daveed Gartenstein-Ross, a widely respected counter-terrorism expert. “The Islamic State has encountered one serious obstacle after another as it has tried to expand its presence beyond Syria and Iraq,” writes Gartenstein-Ross, “and several of its nascent affiliates have met decisive defeat”, and he proceeds to enumerate a series of setbacks suffered recently by IS.

Al-Qaeda and Islamic State seek goals which are nominally the same – “liberating” all Muslim lands, imposing their version of sharia law on Muslims and non-Muslims alike, and creating a global caliphate. But each seeks supremacy. In the words of Daniel Byman of the Brookings Institute, giving testimony to a Congressional subcommittee: “The two are now competing for more than the leadership of the jihadist movement: they are competing for its soul.”

The longer the fratricidal battle, the safer the world.

On 25 June 2020, fourteen members of the Iran-backed militia Kataib Hezbollah (KH) were going about their usual nefarious business.  On this occasion they were setting up rocket attacks
Read More