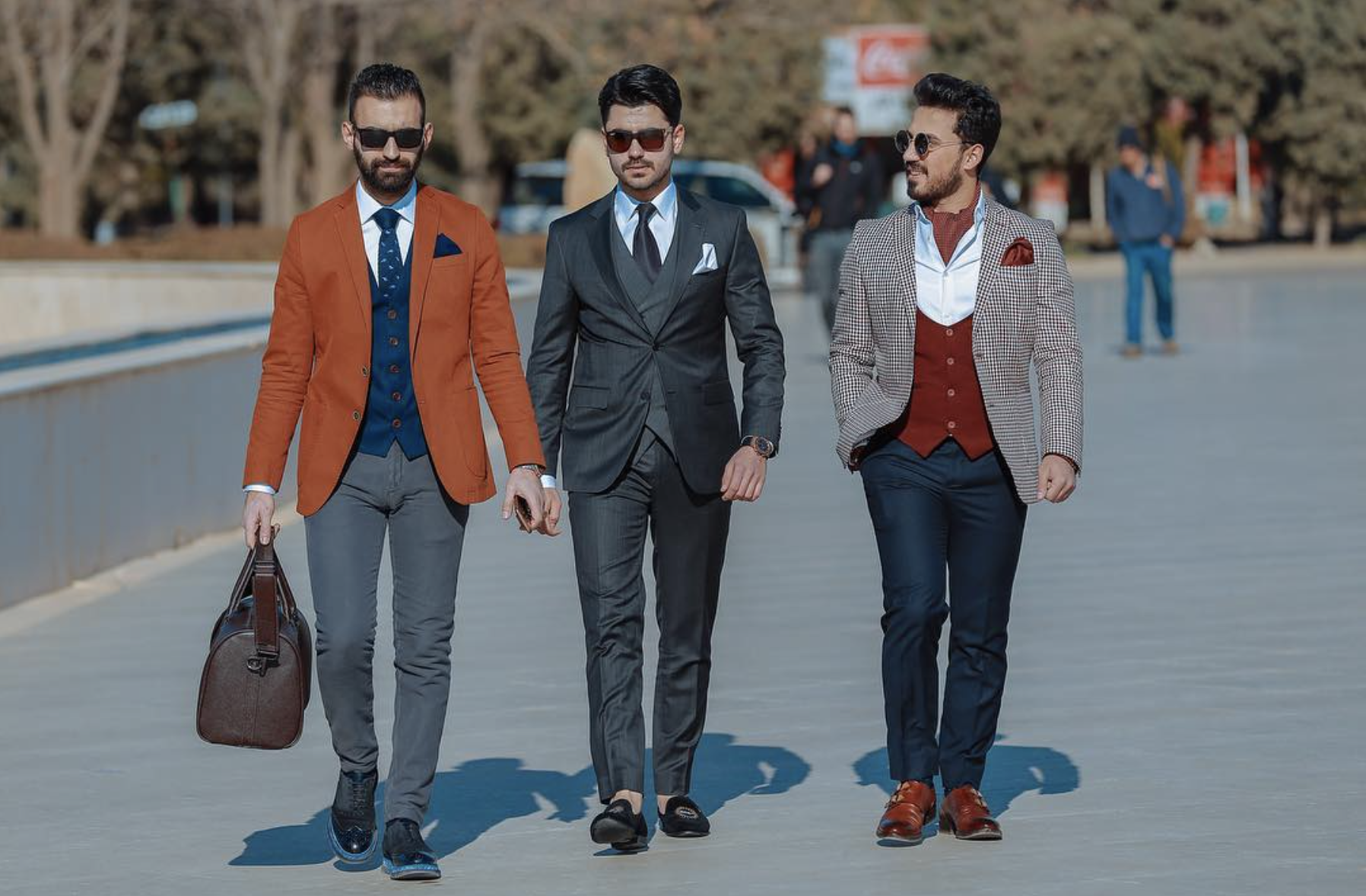 ERBIL, Iraqi Kurdistan – In early February 2016, a group of young men gathered in the ancient citadel at the heart of Erbil, the capital of Iraq’s autonomous Kurdistan Region. It was deep into the second winter of the Kurds’ war against the Islamic State and the region was mired in economic crisis. As a result, restoration work on the ancient UNESCO-listed site — said to be one of the oldest continuously inhabited places in the world — had ground to a halt, leaving the citadel with the air of an abandoned film set.

Against this backdrop, 22 of the city’s finest dressed men gathered. Like an ostentation of peacocks they preened and posed, showing off their finery and taking innumerable selfies. At this first meeting of sartorial minds it was decided: with jobs limited, few opportunities and precious little else going on, why not be the best damn dandies they could be? From this not so humble start, Mr. Erbil — Iraq’s first gentleman’s fashion club — was born.

Less than a year and four “Gentlemen’s Gatherings” later, its founders say they have started a movement — and they’ve got the Instagram followers to prove it. But it’s not just about bringing western styles to Kurdistan, or resuscitating Kurdistan’s own moribund fashion scene. Mr. Erbil’s founders are part of a dynamic, outward-looking generation of young Kurds, who, having grown up with greater opportunities than their parents, are determined to create better lives for themselves, effect positive social change, and bring Kurdish culture to a global audience. All while garnering as many likes as possible.

On a freezing Friday afternoon in early December, Ahmed Nauzad, Goran Pshtiwan and Omer Nihad met up near Erbil’s citadel to discuss plans for their fifth Gentlemen’s Gathering Erbil (or #GCE17 as they’ve already tagged it), to be held sometime in the new year.

The three, all in their mid-twenties, were brought together by a mutual love of fashion. It’s not hard to see why. The trio sport an assortment of lush beards, slicked pompadours and sharp three piece suits, accented with pocket squares, fob watch chains, chunky watches and driving gloves. As they walk, they greet acquaintances with a handshake and a kiss on both cheeks without breaking stride. They pose for photos for strangers and politely wave away the entreaties of beggar children. In a region where most people dress in either cheap imported clothes or traditional Kurdish attire of baggy pants and tunic with a wound cummerbund, the three turn heads.

In many other respects though they are typical Kurdish guys, whose upbringings are reflective of Kurdistan’s modern development. While today they speak English, shop online and are permanently attached to their smartphones, just a few years ago life was a lot different.

“Ten years ago people didn’t have such high expectations in life,” says Nihad.

During the 1990s, the Kurdish region was isolated both from Iraq and the rest of the world. After a failed uprising following the first Gulf War, the Kurds were guarded from attacks by Iraqi despot Saddam Hussein by a UN-implemented no-fly zone over northern Iraq. Still lingering under the international sanctions against Iraq, but isolated from the rest of the country, the region languished. Thousands of families were forced to flee the country; Nauzad grew up as a refugee in Germany. Competition over scarce resources contributed to a brutal civil war, memories of which are harbored but seldom discussed openly. “My earliest memories are of my Dad hiding us in the house because there was fighting,” says Pshtiwan.

But all this changed after the U.S.-led invasion of Iraq in 2003. After Saddam was ousted, and with the rest of Iraq mired in violence, businesses flourished in the relative security of the northern Kurdistan region. Foreign investment followed, as international oil companies raced to obtain exploration licenses. Foreign companies, shopping malls, cinemas and chain restaurants soon appeared. This taste of globalization soon raised expectations for the Kurds.

“Before people didn’t have satellite and under Saddam we were not able to travel,” says Nihad. “After the Saddam regime there was exposure to the outside world. They saw the world and how people dressed.”

Pshtiwan continues: “We learned English and we found a different world through social media.” He graduated with a business management degree from a local university but for the first time American liberal arts education was also available. Nihad studied business administration and information technology at the American University of Iraq.

But even with new shopping malls and stores opening, there were limited fashion opportunities for fashion conscious youth. Nihad and his friends instead turned to local tailors, bringing them designs from abroad to copy. “They are capable of doing great stuff but all they do is the same thing,” he says. “It’s just that people are asking for simple stuff.” With their customized outfits they were soon lending and borrowing from each other to create new ensembles.

Summer 2014 brought a triple shock to the Kurds. A war against the Islamic State posed an existential threat to the Kurds and led to an influx of a million refugees fleeing the fighting. Meanwhile tumbling oil prices brought the economy to a halt. A decade of good times came to an end, leaving a young generation wondering what to do. “We were in a bad situation,” says Pshtiwan.

These days the Kurdish Peshmerga fighters have solidified their defenses and oil prices are slowly creeping upwards, though the economy is still stagnant. “Activity at work is almost at zero and I haven’t been paid in five months,” says Nihad, who is employed at the Erbil Stock Exchange, a venture that is yet to see a single stock traded. He’s not alone in going unpaid. Across the region, public servants, teachers and even the Peshmerga have gone without their salaries for months on end.

The silver lining for Nihad, Pshtiwan and Nauzad was that they suddenly had more time to pursue creative ventures. One idea which took off was launching a line of beard care products, the other was Mr. Erbil. “If we didn’t have this crisis we wouldn’t have had the time to do this,” says Nihad.

The inspiration for Mr. Erbil is Pitti Uomo, a biannual men’s fashion gathering in Florence, Italy. Pitti Uomo is renowned for the extravagant peacocking of its male attendees and is credited with mainstreaming modern dandyism since its inception in the 1970s.

Mr. Erbil is similar but also taps into traditional Kurdish affendi culture. In earlier days, Kurdish “affendi” or “lords” — educated or well-respected men — would dress in their finery to attend salons at local chaikhana or tea shops. “We’re trying as the youth to bring that back,” says Nihad.

They invited friends and contacts through social media for their first gathering. With social media and selfie culture having already taken hold across Kurdish society, it wasn’t difficult to attract attendees. They now have 30 core members and over 25,000 Instagram fans.

Mr. Erbil is more than just a group of ostentatious dressers, though. The guys have big plans for the future. Etiquette classes, a gentleman’s club house, a model agency, barber, tailor and boutique fashion line are all in the pipeline — if they can raise the capital. “It’s more than just clothes and taking pictures,” says Nauzad.

They also want to use their platform to promote a positive image of their homeland and promote social change. “We want to show the world we exist as Kurds, that we have our people, our culture, our land and our flag,” says Pshtiwan. “It’s a good way to introduce people to this.”

Nihad adds: “Now that people know us we are trying to work to resolve everyday issues here.”

One cause they’ve taken on together is the issue of women’s rights. Despite being renowned as a relatively tolerant society, Iraqi Kurdistan is in many ways still deeply traditional and patriarchal. And while a club for men, Mr. Erbil has a day where they post photos of inspirational Kurdish women. “Every Thursday we have girl inspiration, where we give shoutouts to girls who are doing good for the country” says Nihad.

“It’s about showing people that we have to respect women,” Nauzad said.

The men soon leave the citadel for the warmth of a nearby cafe. There, over tea and shisha, they continue planning their next gathering. It will be bigger and better than the ones that came before, they say. It has to be. They’ve got pretenders now, young men from other cities in the Kurdistan Region of Iraq who have launched copycat groups. “We started this movement with the suits,” says Nauzad.