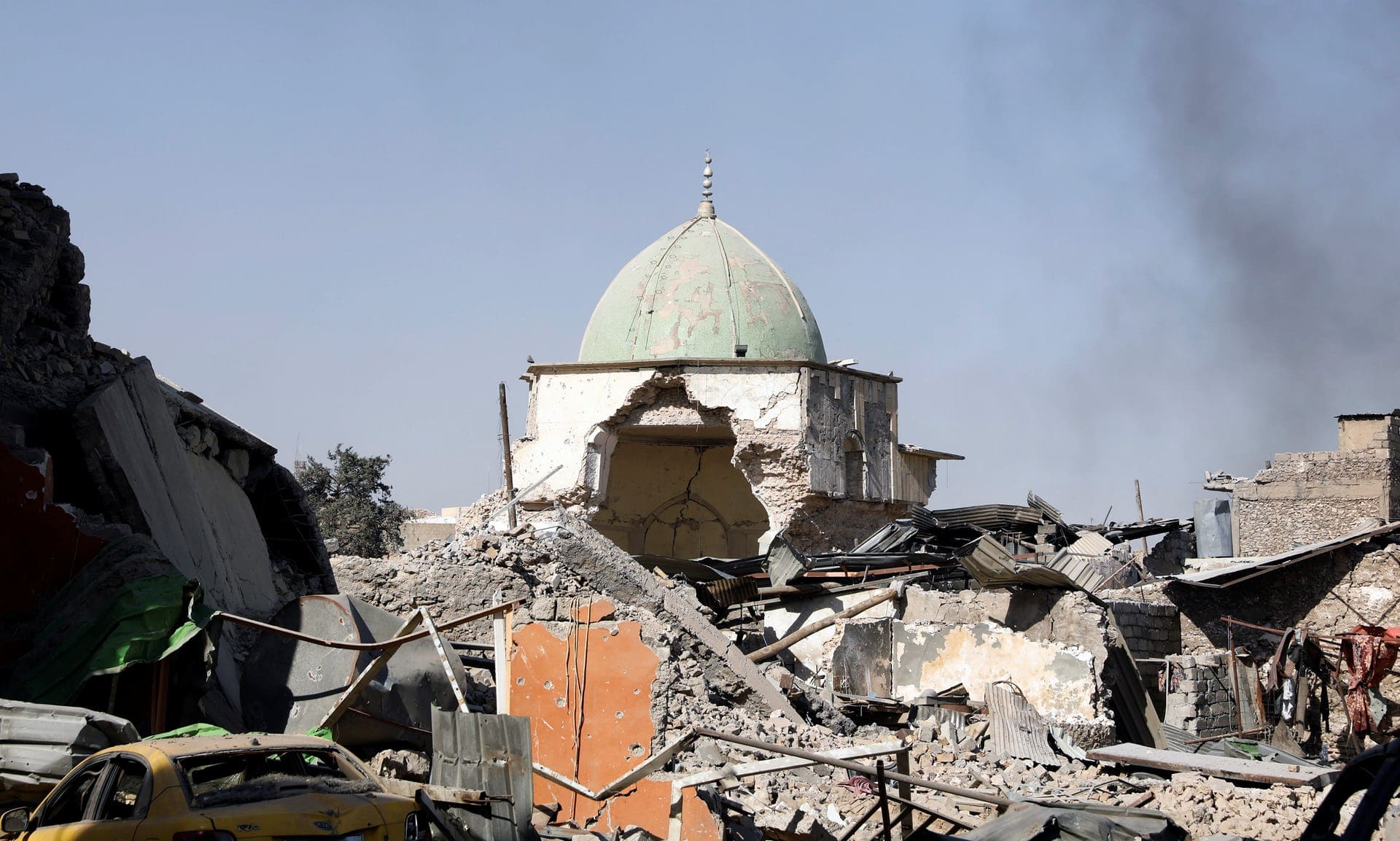 The wealth of cultural sites strewn throughout present day Syria and Iraq bear ample witness to the fact that this area was once revered as the cradle of civilisation – sadly, many of these sites have fallen victim to war, violence and looting.

A world treasure was lost forever recently when, in late June, the 12th century Great Mosque of al-Nuri in the city of Mosul was destroyed – probably blown up by IS jihadists during fighting in the city. Famous for its distinctive leaning minaret, nicknamed “al-Hadba” (the hunchback), it was at this mosque, three years ago, that IS leader Abu Bakr al-Baghdadi proclaimed his “caliphate” in the parts of Syria and Iraq captured by his jihadists.

The mosque’s destruction is just one chapter in the sad catalogue of cultural and historical treasures that have fallen victim to war in recent years. There are many important sites in a region once celebrated as the cradle of civilisation, a melting pot of different cultures since time immemorial and a place where Arabs and Jews, Assyrians and Yazidis, Kurds and Turkmen live side by side in peace.

A group of experts is currently attempting to find out how many of the treasures of antiquity have survived the war. Now, with the terrorist organisation “Islamic State” on the retreat, archaeologists from Syria and Iraq are working with international experts to evaluate the damage and initiate emergency measures to prevent further deterioration of damaged monuments.

Assessing the war damage in Syria

The first UNESCO mission, in January of 2017, discovered that massive amounts of damage had been done to important buildings in Aleppo, such as the Great Umayyad Mosque, the citadel and the centuries-old madrassas and oriental hammams. Churches, too, some of them dating back more than 1000 years and markets that have existed since the 13thcentury, also suffered. The mission’s assessment concluded that around 60% of the old city had been severely damaged, with 30% completely destroyed. Much of the damage was done by a major fire in 2012 after rebels, holed up in the city’s bazaar with its labyrinth of ancient alleyways, fought from there against the government troops.

Like the old city of Aleppo, the historical Palmyra is a World Heritage Site that has suffered because of the war. The famous desert oasis city was once a trading centre on an important caravan route. It was home to the legendary Queen Zenobia, who reputedly claimed descent from Cleopatra. She came to the throne in 270 AD after the death of her husband, but her lust for power was to bring her downfall, when an attempted attack on Rome failed and her city was laid waste in retribution. Palmyra was destroyed again in the 11th century by an earthquake.

In Palmyra, where German archaeologist Andreas Schmidt-Colinet has worked for 30 years, many years of work lie ahead just to document the damage that has been done. Every stone will have to be measured and numbered. The Temple of Bel alone will require several years of dedicated labour.

“A Ruin Has a Right to Die”

The ruined city was twice occupied by the IS militia: between May 2015 and March 2016 and again from December 2016 until March of this year. The archaeologist and director of the Palmyra site, Khaled al-Asaad, was murdered by the extremists after they captured the city and the Roman theatre was later used by them to carry out beheadings. Many of the city’s most important monuments were severely damaged by the IS fighters; along with the Temple of Bel, the ancient triumphal arch, the

Roman theatre and the reconstructed Tetrapylon all suffered. The temple of Baalshamin was also blown up.

Thoughts have now turned to the reconstruction of Palmyra. Archaeologist Schmidt-Colinet, however, has a word of caution: “It must be left to the Syrians themselves to decide what should be done with Palmyra.” As he points out, that it was not the allies who rebuilt the Frauenkirche in Dresden but by the citizens of the city themselves – and that only sixty years later.

“A ruin has a right to die”, he says and “the right to tell its story, just like the face of a grandmother.” The first priority now, however, is to set about rebuilding the ruined city of Tadmur, as Palmyra is also known, repairing its mosques, hospitals and schools.

Damage assessment is also a current priority in Iraq. In 2014, the ancient city of Nimrud, to the south of Mosul, once capital of the Neo-Assyrian kingdom, fell to the IS extremists. Using bulldozers and sledgehammers, they set about the fanatical destruction of such treasures as the temple of Nabu and many precious stone sculptures, capturing it all on video and bringing their atrocities to the world’s attention via social media. Qais Rashid, Iraq’s Undersecretary of Tourism and Antiquities, told a UNESCO conference that up to 80 percent of Nimrud had been destroyed by the extremists.

Even the Iraqi city of Hatra, a former ruler of which was given the title “king of the Arabs” due to his ability to stand up to his enemies, was not spared by the jihadists. The destructive power of bulldozers was used here, too, against massive walls, high and thick enough to have resisted even the might of Rome. “For two years, Hatra was a prime example of the cultural cleansing plaguing the Middle East,” said Irina Bokova Director General of UNESCO following the expulsion of IS from the site last year.

It is the looting carried out by the IS militia, however, just as much as the physical devastation, that has done such incalculable damage. Experts estimate that around one-fifth of the 10,000 or so world-famous heritage sites in Syria and Iraq have been looted under the IS. They stole antique gold coins from Idlib, busts from Palmyra, ancient artefacts such as the famous eye idols from Syria and tablets with cuneiform writing from Iraq, along with amulets, seals and even mosaics – all of them smuggled out of the countries and sold online.

Even such wanton destruction, however, can, on occasion, lead to the discovery of something new. After IS fighters had destroyed the famous Mosque of Jonah, with its tomb of Saint Jonah, in the summer of 2014 and dug tunnels below the remains of the shrine, they accidently revealed something that had remained undiscovered. Archaeologists are now hoping that this find will turn out to be the Palace of the Assyrian king Esarhaddon, who ruled the Neo-Assyrian Empire around 2,700 years ago.

Translated from the German by Ron Walker