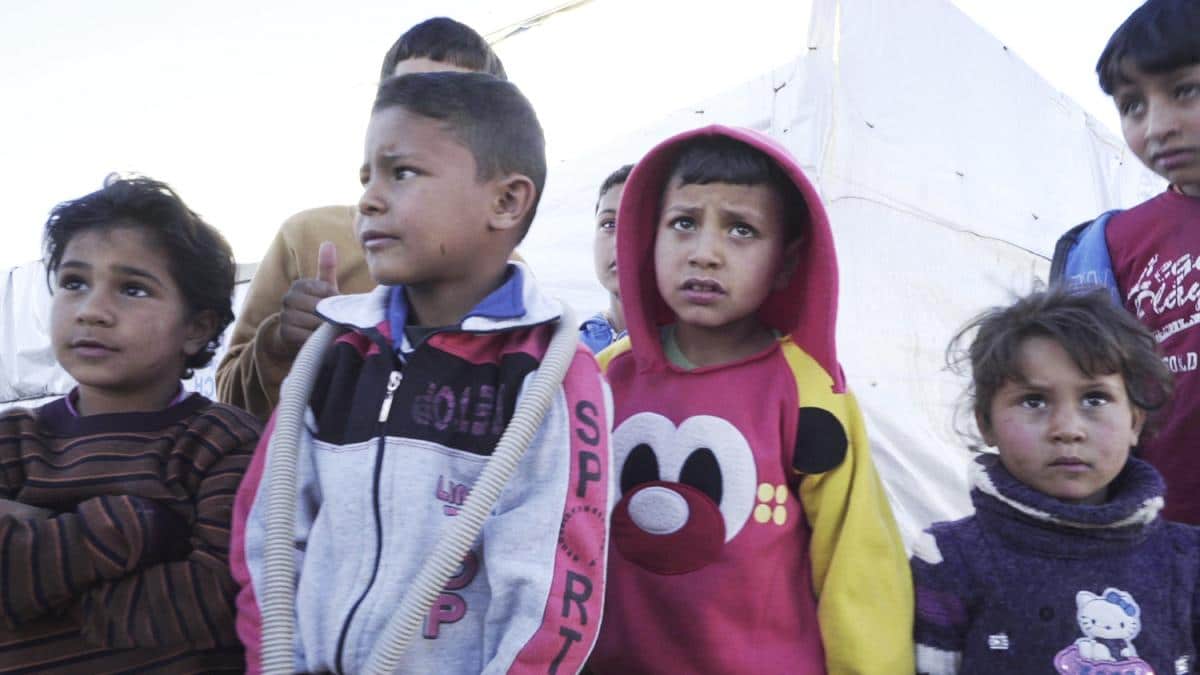 As the world powers are busy carving up Syria’s new boundaries in Geneva and Sochi, a countless number of new lives and their future is not taken on priority.

Seven months old Sam is biting into a toy. Ahmad, his father, is hanging a decoration piece on the door with alphabets strung on a thread and reads: ‘My first tooth’. Signs of celebration are strewn across the tiny two-room flat in Beirut and sitting amidst colourful balloons, the babbling infant is reaching out for his mother. In wonderland, the baby is completely oblivious to his statelessness. Sam belongs to no country. Legally, he doesn’t exist.

He was born to Syrian parents Ahmad and Eva in July last year in Lebanon but so far, his birth has not been registered.

Feeding Sam baby food, Eva says, “One of the parents has to be legal to register the baby in Lebanon and neither of us is, so we couldn’t register him.”

Ahmad fled Syria to dodge compulsory draft and avoid fighting in Assad’s army. “The Syrian army is asking soldiers to kill normal people who ask for freedom,” he says. Ahmad didn’t want to join the Syrian army because that would mean killing fellow Syrians. He didn’t want to fight for any of the myriad rebel groups either. Ahmad thought it better to run away and hide in Lebanon than die in a war he doesn’t associate with.

To apply for a legal status in Lebanon entailed returning to Syria to seek an exemption. Ahmad says for him that is not an option. “They will kill me because they think I am selling weapons to anti-regime forces,” Ahmad says, his voice trembling. He fears that if he returns, the regime will be suspicious of him for not fighting for the army and might punish him by death or incarceration.

According to Syrian law, every man must undergo compulsory draft and serve the Syrian armed forces. There are some exemptions like paying a sum of $8,000 or if the man is the only son in the family or if he is chronically ill. Ahmad has no money and no excuse. He would be treated as a traitor.

Eva has no such concerns and approached the Lebanese authorities on several occasions to obtain a legal status. Every time, she says, she was denied.

“I went to Syria so many times and returned with everything the security authorities in Lebanon asked me for. Still they said no,” she emphasises. “They refused every time saying, we don’t want Syrians here, go back.” Voice wobbling and eyes teary, she added: “They said, you will take jobs the Lebanese are entitled to.”

The Lebanese authorities are concerned that the educated Syrians will compete with their Lebanese counterparts and may be preferred by employers because they are more inclined to offer cheap labour.

The bigger fear for the Lebanese stakeholders is of a demographic tilt. Power in Lebanon is divided amongst the Christians, the Sunnis and the Shias based on their numbers.

If it is made easier for the Syrians to stay back and their babies are registered in Lebanon, young families like Ahmad and Eva’s have nothing forcing them to move back to Syria. This would eventually lead to the rise of the Sunni over the Christians and the Shias because almost all the Syrian refugees in Lebanon are Sunnis.

Mike Bruce, Advocacy and Information Advisor of the Norwegian Refugee Council (NRC) says that the process for the Syrians is deliberately made Kafkaesque so the poor families find it difficult to legalise their presence in Lebanon and register their infants.

“Tens, even hundreds, of thousands of children born in Lebanon have not had their births registered,” says Mike via email. He adds, “When a person’s birth goes unregistered, it makes it more difficult to seek international protection, to access basic services, and puts them at heightened risk of statelessness.”

The full birth registration process for foreigners on Lebanese territory includes five main steps. However, most protection and legal actors providing advice on birth registration (including NRC) mainly recommend that refugees complete the first three time-sensitive steps. These include:

1. Receiving a Birth Notification from the birth attendant;

2. Visiting the relevant Mukhtar, who should provide a Birth Certificate; and then

3. Taking the documentation for registration at the Personal Status Department that includes (a) the Nofous; and (b) only if the parents have legal stay documentation, the Foreigner’s Register.

According to NRC, a recent change in the law suggests that even if both parents are residing illegally in Lebanon, they can register the children. But, most parents are apprehensive of being imprisoned or deported for breaking the law and shy away from encountering authority.

Eva and Sam were not aware of the change in the law because of a lack of information provided officially. The couple suspects a systematic denial of legality to them and their child by Lebanon.

“May be, it happened for a reason. Now Sam will be a Belgian citizen,” says Eva with a wide smile.

Disappointed by Lebanon, the couple applied for political asylum in Belgium through a Swedish friend. Eva works as a conversation partner for Westerners practicing Arabic online and through her work got connected to people in the NGO world. Within a matter of days, the family received all the necessary permits. Belgium had pledged to support a 1,000 Syrians and Eva and Ahmad were applicants in the low risk category.

Stuffing Sam’s toys and other personal belongings of the family in three suitcases — months after I first met them — Ahmad is jubilantly packing up. The family leaves for Belgium in the first week of February.

“He [Sam] will get education, health rights, a home. Everything [will] be his right” says Ahmad. “What’s there in Syria? What did it give me?” Ahmad’s rhetorical question reflects his agony and fatigue with a war that many Syrians think represented a regional war for control more than the cause of democracy and economic rights.

As Ahmad, Eva too is excited about the move.

“Any place is better than Lebanon. We face daily racism here,” she narrates an unforgettable experience. “I heard a Lebanese family talking to each other in a restaurant and they were saying, why are these Syrians in Lebanon? During the civil war in Lebanon, we didn’t go to Syria.” Eva adds, “But they don’t understand how different it is in Syria. Much of the country is bombed. There is no electricity. Life is a major struggle.”

Eva has heard tales of discrimination against the people of Syria in Europe, but she thinks it is not as wide-spread and intense as in neighbouring Lebanon. She is determined to change the impression of Syrians in Brussels and culturally fit in.

“I used to wear a hijab in Syria and people thought I supported ISIS, but now I wear a turban, it looks like a cap. This should work in Belgium too,” Eva shares.

Sam’s family is preparing for the big change and is lucky to have found a way-out. But such cases are rare. According to surveys conducted by UN agencies and the NRC, 50,000 Syrian children in Lebanon are stateless.

At a camp in Tripoli in North of Lebanon, Sabah Hamid Ubaid is singing a lullaby to calm her two-year old son Mahmoud. Her five-year old Ilaaf is busy watching a cartoon show on television, a surprising yet necessary luxury for a household with five kids.

Sabah illegally crossed into Lebanon after undertaking a tedious journey from the Syrian mountains to the Lebanese border. She took refuge in a camp in Tripoli with her husband and three kids. In a tent in the camp, she gave birth to Illaf and Mahmoud. While three of her kids are Syrians, the other two, born in Tripoli, have no country to call their own. Sabah’s illegal status, she says, has hindered her from registering them. That is despite Sabah being a volunteer for the UNHCR. The situation is grim if the volunteers who are expected to spread awareness about new laws, changes in the old ones and schemes relevant to the refugees, are not aware of the processes. Sabah has no idea that there has been a change in the law, which allows illegal parents to register their babies.

In another tent, barely ten minutes walk from Sabah’s, Maruwan is swaying her two-month-old baby Alee. Two of her other children, aged four and two, are loitering around. When she left Syria along with her husband Sheikha, they took all their identity papers, marriage certificate and family booklet. Even then, Maruwan has been unable to register the baby. Speaking softly, she says she has no clue about where to go to get her registered.

“I have no proof the girl is mine,” says Maruwan in desperation. “I don’t know which government office to go to?”

Reluctance by the state to facilitate the registration of infants and legalising the stay of their parents is a big hurdle for young families. A fear of punitive action like imprisonment or banishment instills doubts amongst the parents to approach authority. An astonishing lack of information — despite the presence of a range of civil society members, including volunteers offering services — is another barrier. This isn’t the story of just Lebanon but also of Jordan, Iraq and Turkey. Experts fear Syrian children facing statelessness is likely to be much higher than 50,000 estimated in just Lebanon.

Without a country, hundreds and thousands of these children risk missing out on basic rights such as healthcare, education and an identity.

An entire generation of Syrians is living in a grey zone, heading towards a dark future. They could be trafficked and exploited, could be pushed towards criminality.

Author: Anchal Vohra is a journalist shuttling between Berlin and Beirut. She writes on West Asia and Europe.

This is an adapted version of the source: ORF