There has been ample reporting on the events of the day, but allow me to add some thoughts and clarifications. To recap quickly, an Iranian-controlled unmanned aerial vehicle (UAV) was detected over northern Israel and shot down. The Israelis responded by launching four F-16I “Sufa” fighter-bombers (like the one shown in the above photograph) to strike the facility used to control the UAV.

Syrian air defense units fired a volley of as many as 24 surface-to-air missiles at the jets, hitting one, causing it to crash in northern Israel as it tried to reach an Israeli air base.

Most Middle East analysts knew this was coming at some point, given Iran’s expanding influence in the region. The Islamic Revolutionary Guard Corps (IRGC), spearheaded by its special operations unit, the Qods force, has been a key player in supporting the government of Syrian President Bashar al-Asad.

That support has included what many consider the bulk of the Syrian alliance forces – IRGC units, Iranian army units, Iranian-led Iraqi Shi’a militiamen, Lebanese Hizballah fighters, and even volunteer Shi’a fighters from Afghanistan. Without this Iranian-led support, the Syrian regime would have likely been overthrown in 2012.

The Iranians have also provided materiel support to Syria, including a variety of unmanned aerial vehicles (UAV). It is common to see the Mohajer-4 reconnaissance UAV as well as the armed Shahed-129 UAV in Syrian skies. The U.S.-led coalition has shot down at least two of the armed versions over Syria. It is believed that the drone downed by an Israeli Air Force AH-64 Apache helicopter today was a new Iranian UAV based on an American UAV which Iran seized in 2011.

The Israelis believe the UAV was launched from an Iranian unit at Tiyas air base, located in the central Syrian desert between the cities of Homs and Palmyra (Tadmur). It is also referred to in some media as T-4 (variants Tifur or Tayfur) because it is adjacent to the T-4 pumping station.

The Israeli defense ministry released a reconnaissance photograph (below) of what they claim is an IRGC UAV unit at the base. I have circled the location of the unit on the larger satellite image. 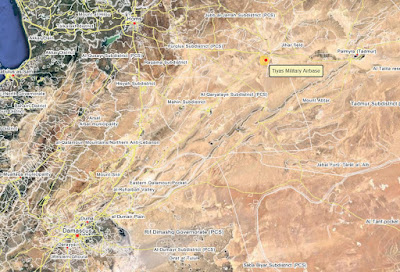 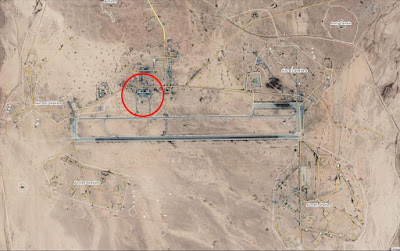 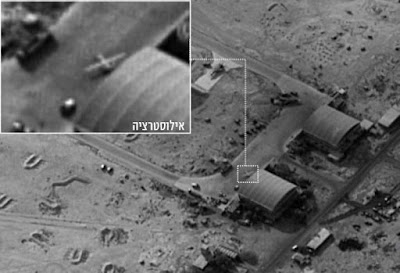 Some media reports are questioning why the Iranians chose to launch a UAV sortie against northern Israel from Tiyas. The distance from the base to where the UAV was downed near Beit She’an by the Israeli Apache is 300 kilometers/185 miles – there are numerous other bases and locations closer to Israel from which to conduct such operations. (Note: the red line is NOT the flight route for the UAV.) 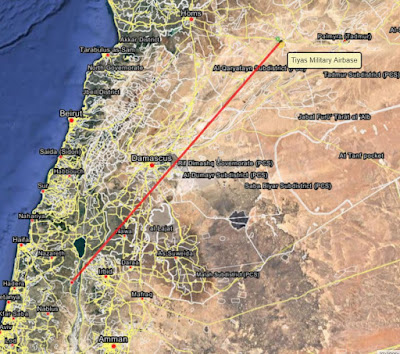 In this case, the simplest answer is probably correct. Tiyas is where the IRGC has set up its operations to support the Syrian regime. Its central location makes sense, and the airfield can handle large transport aircraft, including Islamic Republic of Iran Air Force planes as well as those of the not-so-covert IRGC support airlines (YAS Air, Pouya Air, Fars Qeshm, and SAHA).

Many observers are wondering how the Syrian air defense was able to down an Israeli Air Force F-16 when it has not been able to in the past. I am not sure of the flight path today, but Tiyas is a bit further inside Syria than many previous targets. Although the Israelis struck a nascent nuclear facility at located on the north bank of the Euphrates River between al-Raqqah and Dayr al-Zawr in 2007, that area is almost devoid of capable air defenses. Tiyas, on the other hand, sits in the middle of an intense air defense environment.

Here are the “threat rings” for Syria’s air defense missiles. 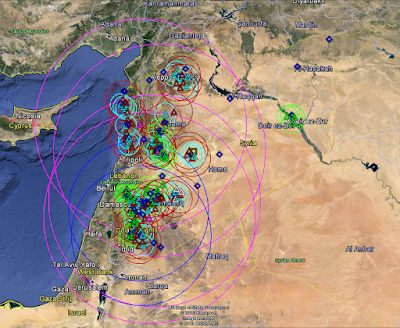 Here are the threat rings for the long-range S-200 (NATO: SA-5 GAMMON) system that was used to down the F-16. Even if the F-16’s used stand-off weapons and launched them from a distance, the location of Tiyas would necessitate entering the heart of the SA-5 threat envelope. 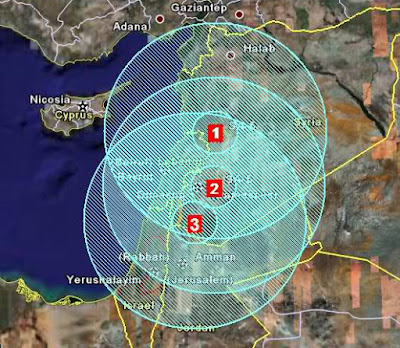 According to the Israelis, the Syrians fired a volley of as many as two dozen SA-5 and Kvadrat (NATO: SA-6 GAINFUL) missiles. One missile was able to penetrate the Israeli electronic warfare defenses and damage one of the four F-16s conducting the mission against Tiyas.

The Israeli response was quick and predictable. It will extract a price for the loss of the F-16, and also for the blow to its ego. There have been two waves of retaliatory airstrikes, hitting a variety of air bases and air defense units, air defense command and control facilities, and installations known to be associated with the IRGC. For example, one of the targets was Khalkhalah air base, located 25 miles south of Damascus on the al-Suwayda’ road. Syrian press reports that the SA-5 site just north of the air base was hit as well. 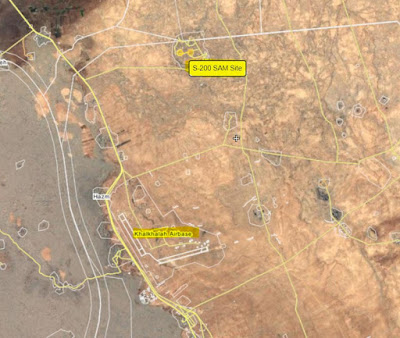 This will continue until the Israelis believe they have made their point.