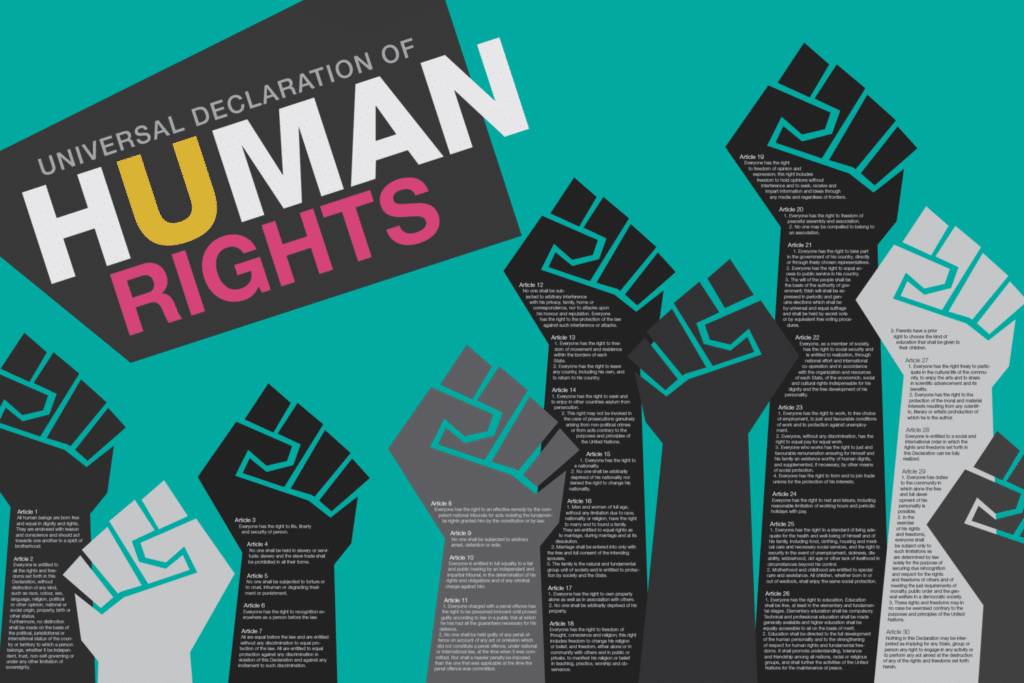 It was sunny in Sydney, Australia, on Thursday morning. A guest of the city’s opulent annual writers’ festival, I was about to tape a talk show at the headquarters of the Australian Broadcasting Corporation. In the waiting area of the makeup-and-hair room, reading material was strewn on a low table: a few magazines, some flyers, and several copies of a precious pocket edition of the Universal Declaration of Human Rights in a glossy baby-blue cover. The thirty articles of the Declaration fit onto fourteen tiny pages and still left enough room for an additional introduction, which said, in part, “These rights belong to you. They are your rights. Familiarise yourself with them. Help to promote and defend them for yourself as well as for your fellow human beings.”

A few hundred kilometres off the coast of Australia, on Manus Island, six hundred refugees continued to lead temporary lives in temporary quarters, neither housed nor imprisoned; they had been there for years, living in conditions that Amnesty International has described as “tantamount to torture.” Elsewhere in the world, according to the United Nations, there are a record 65.6 million people who have been forcibly displaced; 22.5 million are considered refugees; ten million people are currently stateless. These people, roughly half of whom are children, lead lives of endless uprootedness and impermanence, their movements severely restrained but their location indeterminate.

My life is the opposite: both rooted and full of motion. The other day I easily entered Australia, pausing for less than a minute at customs, where an officer checked that I had received a visa, which I had requested electronically. I had indeed received it, in just a few hours, because I happen to be in possession of a dark-blue United States passport. Now I placed the light-blue book of human rights in my pocket next to it.

Masha Gessen, a staff writer at the New Yorker, has written several books, including, most recently, “The Future Is History: How Totalitarianism Reclaimed Russia,” which won the National Book Award in 2017.

Sixty-nine years ago, Hannah Arendt wrote a phrase that has gradually become one of her most quoted and often interpreted: “the right to have rights.” The phrase summed up her skepticism about the concept of human rights—those rights that, in theory, belong to every person by virtue of existence. But how are these rights guaranteed? For that, Arendt suggested, one had to be not only a person but also a citizen. In other words, while the rights in the light-blue book might indeed “belong” to me, I can claim them because I also have the dark-blue passport.

The Arendt phrase, used first in a 1949 article and again in the 1951 book “The Origins of Totalitarianism,” has been the subject of a series of interpretations in the last few years. Most recently, Verso has published an elegant little book of essays by four academics who endeavored not only to unpack the phrase but also to find interpretations that can inform and inspire resistance to the current worldwide assault on human rights. The book is called “The Right to Have Rights.”

Arendt was a stateless refugee for eighteen years, from the time she fled Nazi Germany, at the age of twenty-seven, until she was naturalized as a United States citizen, in 1951. By the time the Universal Declaration of Human Rights was adopted by the United Nations, in 1948, Arendt was living in America: she had already received political asylum but was not yet a citizen. She greeted the Declaration with some enthusiasm at first, seeing it as the foundation for an international mechanism for guaranteeing rights. But she quickly grew skeptical. “The right to have rights, or the right of every individual to belong to humanity, should be guaranteed by humanity itself,” she wrote, adding, “It is by no means certain whether this is possible.” Any new international mechanism, she wrote, still depended on the willingness of nations to enforce it—to protect the very people who had been rendered unprotected by losing their national affiliations. Since then, things have grown only worse. A worldwide politics of resentment of international institutions has taken hold in the era of Vladimir Putin, Donald Trump, and a whole army of Euroskeptic politicians.

“The refugee crisis after World War II revealed to [Arendt] that humans can exist in a place called nowhere; they can be displaced from political community—they can be turned into abstractions,” Stephanie DeGooyer, who teaches in the English department at Willamette University, writes in “The Right to Have Rights.” In the absence of a context, an audience, or a community in which to claim their rights, they could not be protected. Still, DeGooyer writes, Arendt held out hope for one place: the United States, which always, in Arendt’s words, “considered newcomers as possible prospective citizens.” In 2018, however, America’s attitude toward immigrants seems to have undergone such a profound transformation that Arendt’s “so-called last hope, maybe the only hope” looks unfounded.

Each author in “The Right to Have Rights” focussed on one word in the famous phrase. Lida Maxwell, who teaches in the politics department at Trinity College, writes about the verb “to have,” which she suggests can be interpreted not as a verb of possession but “in the way we might ‘have’ a meeting, or a dinner party, or a conference, or a convention. Here, ‘to have’ rights means to participate in staging, creating, and sustaining (through protest, legislation, collective action, or institution building) a common political world where the ability to legitimately claim and demand rights becomes a possibility for everyone.” The January, 2017, airport protests against Trump’s first attempt to ban entry to the United States from predominantly Muslim countries, Maxwell writes, can be read as just such a project of creating “a world where everyone can legitimately make rights claims.” This is probably the most hopeful moment in the slim volume.

Since the book’s publication, in February, the Supreme Court has heard arguments on the latest iteration of Trump’s travel ban, and has signalled that it is likely to let the ban stand. Deportations from the United States have continued to mount. The U.S. Citizenship and Immigration Services have removed the description of the country as a “nation of immigrants” from its mission statement.

Meanwhile, in the United Kingdom, the story of the so-called Windrush Generation has come to light. About half a million people who have been living in Great Britain, and who have for most of their lives believed themselves to be British subjects because they came from British colonies in the Caribbean, are facing uncertainty about their citizenship status, or much worse. Some, it has emerged, have for years been denied benefits, the right to work, or the right to reënter the country. Contrary to the claim in the pretty light-blue book, human rights do not “belong” to them: they can be given and taken away by an impersonal and impervious bureaucracy.

Writing in the Verso book, the Yale law professor Samuel Moyn recalls that Arendt suspected that the Universal Declaration of Human Rights could turn into “a set of pleasant normative assertions.” In Arendt’s estimation, Moyn writes, to parade a list of rights before people who lack basic citizenship was “something like offering a detailed inventory of the courses of a lengthy meal in the presence of the starving.” It is clear that not only can “humans exist in a place called nowhere” but, once they have lost their position in the political community, they can never be certain of regaining it.