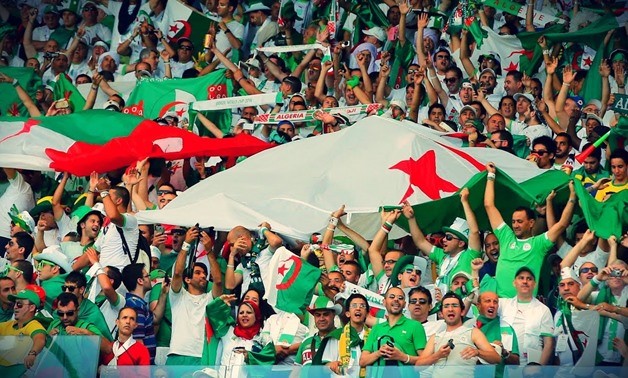 It took Algeria barely two weeks to charge Algerian soccer fan Samir Sardouk and sentence him to a year in jail for harming the national interests of his country.

Mr. Sardouk was convicted for shouting “There is no God but Allah, and they will come down” during the African Cup of Nation’s opening match in the Egyptian capital of Cairo on June 21.

Four other Algerians were given six-month suspended sentences for lighting firecrackers in the stadium.

Mr. Sardouk’s slogan referred to demands put forward in months of mass anti-government protests that all those associated of Abdelaziz Bouteflika, the country’s long-standing president who was toppled in April, be removed from office.

Mr. Sardouk’s sentencing casts a shadow over the Algerian squad’s achievement in reaching the African Cup final for the first time in 29 years after defeating Nigeria.

Together with celebrations of Algeria’s earlier qualification for the African Cup’s semi-finals after defeating Ivory Coast, it demonstrates the risk for autocrats and illiberals who use sports in general and soccer in particular to project their country in a different light internationally and polish their tarnished images by associating themselves with something that evokes the kind of deep-seated passions akin to the power of religion.

If celebrations of Algeria’s semi-final qualification and subsequent victory over Nigeria are anything to go by, an Algerian triumph in the finals, like past soccer victories in countries like Egypt and Iran, are likely to inspire rather than distract anti-government protesters.

Algerians fans in France took to the streets in Paris, Marseille and Lyon within hours of Algeria reaching the final. Their celebrations were mired by violence.

Similarly, the semi-finals celebrations spilled over into mass anti-government protests despite a huge police presence on the streets of Algiers and Paris added to the significance of Mr. Sardouk’s conviction. The protesters demanded a “civilian, not a military state”

Algerian police reportedly detained a dozen demonstrators. “There is a clear desire to prevent peaceful marches in Algiers, the deployed security device says it all.” tweeted Said Salhi, vice president of the Algerian League for the Defense of Human Rights (LADDH).

Violence associated with this year’s tournament was nonetheless minimal when put into the context of violence in Algeria having become a norm prior to this year’s revolt and the fact that the uprising has been largely peaceful.

The apparent shift away from violence is all the more remarkable given Algerian psychologist Mahmoud Boudarene’s assessment in 2014, a time of multiple soccer-related incidents.

“Violence in Algeria has become ordinary and banal. Hogra, the word Algerians use for the government’s perceived contempt for ordinary citizens, has planted a sickness in Algerian society. People feel that the only way to get anything done is to have connections or threaten the peace. It is a system where hogra and social injustice rule. Social violence has become the preferred mode of communication between the citizen and the republic — today in our country everything is obtained through a riot,” Mr. Boudarene told the Associated Press at the time.

This year’s popular revolt, inspired by lessons learnt from the 2011 popular Arab revolts, has emboldened protesters and given them a sense of confidence that is likely to ensure that potential African Cup final celebrations-turned-protest remain largely peaceful.

With Algeria having qualified for the final, the Algerian defence ministry, despite the police posturing, was preparing six military planes to fly 600 fans to Egypt for the African Cup final.

The gesture underlined soccer’s political importance and constituted an attempt by the military to align itself with the Algerian squad’s success.

The significance of soccer makes Mr. Sardouk’s sentencing all the more remarkable despite the assertion that his slogan mired Algeria’s march towards soccer victory.

For starters, it sought to draw a dividing line between national honour and protest in a country where a majority are likely to be soccer fans.

He was convicted at a time that Algeria has been wracked by protests since February in support of political reforms that would dismantle the country’s long-standing, military-dominated regime with a more transparent and accountable government.

The conviction is also noteworthy because Mr. Sardouk’s protest, coupled with acts of defiance by militant Egyptian soccer fans, threatened to turn the African tournament into a venue for the expression of dissent from across the Middle East and North Africa, a region populated by autocratic, repressive regimes and wracked by repeated explosions of poplar anger.

Finally, the sentencing was striking because it violated the spirit of both the military’s effort to retain a measure of control by co-opting the protests and a long-standing understanding with militant soccer fans that preceded the recent demonstrations that allowed supporters to protest as long as they restricted themselves to the confines of the stadium.

The Algerian military’s attempt to curtail fans and co-opt the revolt bumps up against the fact that the protesters, like their counterparts in Sudan, Morocco, Pakistan and Russia, have sought to avoid the risks of the military seeking to implement a Saudi-United Arab Emirates template to blunt or squash the protests.

The core lesson protesters learnt is that the protests’ success depends to a large extent on demonstrators’ willingness and ability to sustain their protests even if security forces turn violent. An Algeria that emerges from the African Cup final as the continent’s champion would give the protesters a significant boost.

It also constitutes an opportunity to ensure that Algeria does not revert to an environment in which violence is seen as the only way to achieve results.

Said a former senior Algerian intelligence official: “We will return to violence if there is no real democratic transition. The African Cup doesn’t fundamentally change that but does offer a window of opportunity.”

This story first appeared on Africa is a Country