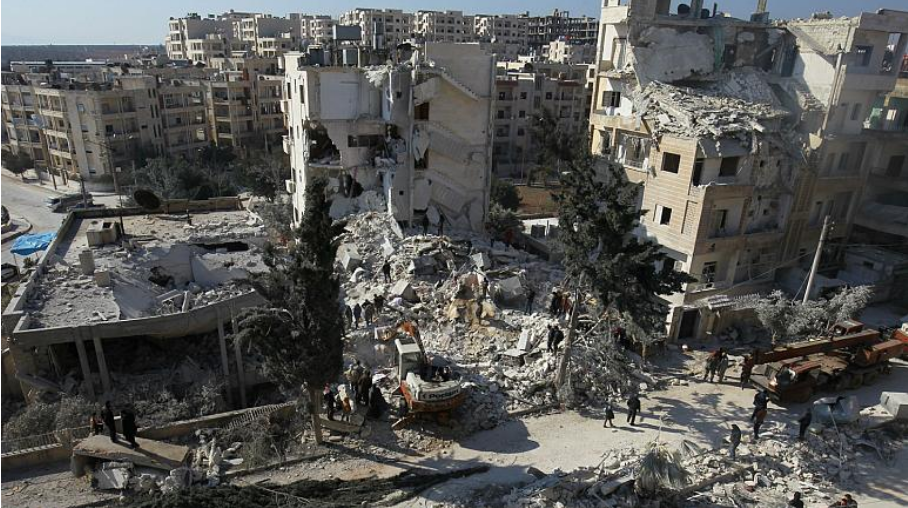 In March 2011 a few teenagers in a southern Syrian city – fired no doubt by the revolutionary fervour sweeping the Middle East at the time – daubed some inflammatory slogans on a school wall. Unfortunately for them, the Syria that President Bashar al-Assad had inherited in 2000 from his autocratic father was a tightly controlled police state, in which a powerful and all-encompassing security machine ensured that the slightest hint of opposition to the régime was ruthlessly crushed.
The youngsters were hunted down, arrested and tortured. When details of their ordeal became known, protesters took to the streets. The security forces, unable to break up the demonstration, eventually fired into the crowd. That was enough to spark widespread rebellion. Groups antagonistic to Assad’s government began nationwide protests. Gradually, popular dissent developed into an armed revolt. The opposition, consisting of a variety of groups, but primarily the Free Syrian Army (FSA), were finally seeking to overthrow the despotic Assad régime and substitute a democratic form of government.

Had assistance of any sort been forthcoming from the US or other Western governments at that early stage, Assad could have been defeated, to be replaced by a democratically elected government. But President Obama hesitated, and then continued vacillating even after it was clear in August 2013 that Assad had used chemical weapons against his opponents, utterly indifferent to the extensive civilian casualties that ensued.

Why did Obama shrink from action? Because he had set his sights on a nuclear accommodation with Iran, which always regarded Syria as essential to its Shi’ite empire. Rather than put his projected nuclear agreement in jeopardy, Obama reneged on his declared intention to punish Assad if he deployed chemical weapons. Instead he seized on a deal brokered by Russia, under which Assad would nominally surrender the whole of the chemical arsenal that he had originally denied possessing.

America’s hesitancy provided Russia’s President Putin with a golden opportunity. He seized the political initiative, turning himself into Assad’s protector, supporter and ally. Ever since he has backed Assad’s ruthless determination to regain as much as he could of Syrian territory lost to Islamic State in the heyday of its caliphate.

Meanwhile the shining sword of democracy, the weapon the rebels in 2011 hoped would bring down Assad’s dictatorial regime, has become heavily tarnished. Those who are now labelled “rebels” are not fighting for democracy – they are fighting for their lives. The original FSA, once dedicated simply to establishing democracy in Syria, has over the nine years of civil conflict been transformed into an entirely different animal. Literally scores of groups – some political, some religious, some a combination – have attached themselves to the FSA, united by opposition to Bashar al-Assad but espousing a plethora of policies. These bodies include Salafi jihadist groups (such as the al-Nusra Front), and remaining elements of ISIS, for whom establishing an open democratic form of government after Assad is far from their aim.

A second democratic casualty of the civil war is Kurdish hopes of a recognized identity in a post-war Syria. Assisted by the massive Russian military intervention, Assad has regained some 70 percent of what was once sovereign Syria. The Kurd-occupied region, which is about 25 per cent of the old Syria, is now a semi-autonomous region formally designated the Democratic Federation of Northern Syria (DFNS) or, more simply, Rojava. Back in the summer of 2019, on the assumption that Assad would emerge victorious, its leaders made formal moves to reach an accord with the Syrian president. At that time an accommodation within a new post-war Syrian constitution seemed a distinct possibility, akin to the situation in Iraq, where an autonomous Kurdistan is a separate element within the Iraqi constitution.

The fly in this ointment was Turkey’s president, Recep Tayyip Erdogan. Any such formal recognition of Rojava would be anathema to him. Fractious Kurds struggling to achieve a degree of autonomy have been a constant political problem for all Turkish governments, including Erdogan. Because Rojava’s leading political party has links to Turkey’s militant PKK , Erdogan asserts that Rojava itself is a challenge to Turkey’s national interests.

“We will never allow a state to be formed in northern Syria, south of our border,” declared Erdogan in 2015. “We will maintain our struggle whatever the cost… We will not condone it.”
A political crisis was averted when the US reached an agreement with Turkey to create a so-called “safe zone” in north-eastern Syria, to allow Turkey to protect its borders. It amounts to a Turkish occupation of what was once sovereign Syria, but latterly a Kurdish area,
Meanwhile Assad’s offensive in Idlib proceeds. He has made huge gains in recent weeks and now controls most of the north-west, including the M5 highway connecting Damascus and Aleppo, Syria’s second city. As a result, on February 19 a Syrian commercial flight landed at Aleppo airport from Damascus, marking the resumption of internal flights between Syria’s two largest cities for the first time since 2012.

Idlib, however, was established in 2018 as a de-escalation zone by Russia and Turkey. Erdogan, outraged by Assad’s advances into the province, has threatened to launch an operation against Assad’s forces if Damascus fails to withdraw behind Turkish military positions by the end of February. “An operation in Idlib is imminent,” Erdogan told parliament on February 19. “We are counting down.” He said Turkey was determined to make Idlib a secure zone “no matter the cost”.
The cost in human lives and suffering is already unacceptable. Hundreds of thousands of innocent civilians are being bombed and shelled unmercifully. At the moment of writing Assad’s forces, totally regardless of the humanitarian disaster they are inflicting, are engaged in their final push to capture the province of Idlib, sending up to a million Syrians fleeing the fighting with no safe refuge available. The death, destruction and misery that would result from a military conflict between Syrian and Turkish forces in the region is too horrific to contemplate. Power politics simply must give way to humanitarian relief.