Syrian government has used barrel bombing in hundreds of locations over the past year. The latest Human Rights Watch (HRW) report reveals staggering violations of human rights and increase of war crimes.

The report mentioned that Al-Assad regime used a wide range of weapons, including improvised explosive barrel bombs to put an end to opposition forces.

The HRW revealed that the Syrian regime “has carried out hundreds of new indiscriminate attacks over the past year with air-delivered munitions, including improvised weapons such as barrel bombs. The attacks have had a devastating impact on civilians, killing or injuring thousands of people.”

Barrel bombs are locally produced weapons, typically 300 to 600 kilograms. They are constructed from “large oil drums, gas cylinders, and water tanks, filled with high explosives and scrap metal to enhance fragmentation, and then dropped from helicopters usually flying at high altitude,” according to the HRW report.

HRW has documented repeated barrel bomb attacks in both Aleppo, north of Syria, and Daraa, south of Syria since the Security Council Resolution 2139 on 22 February 2014. The regime’s strikes were “near or on medical facilities, and in residential areas with schools, mosques, and markets, and without discernible military targets in the vicinity.”

The report also holds the international community accountable for the new wave of brutal attacks against civilians, “Although the United Nations Security Council condemned the attacks in a resolution adopted a year ago, it has not responded directly to the new wave of attacks.”

“For a year, the Security Council has done nothing to stop Bashar Al-Assad’s murderous air bombing campaign on rebel-held areas, which has terrorized, killed, and displaced civilians,” said Nadim Houry, Human Rights Watch’s deputy director of the Middle East and North Africa division.

The head of the western-backed Syrian opposition alliance, Khaled Khoja said: “The HRW report further adds to the disappointment over the UN Security Council’s failure to take any steps to stop the Assad regime’s aerial bombing campaigns against civilians and also over its failure to shoulder its responsibilities for maintaining international peace and security.”

The HRW report identified at least 1400 damage sites in Daraa and Aleppo over the past year. In an exclusive interview for Al-Assad with the BBC‘s Editor Jeremy Bowen recently, he denied that his forces had dropped barrel bombs on rebel-held areas without discrimination, killing and injuring thousands of civilians. 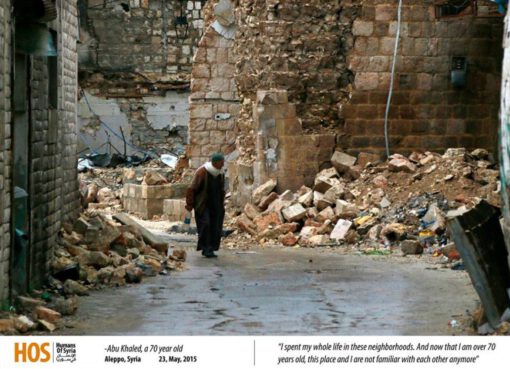